PSA: this is one of three Disneyland Paris posts so if you’re a Disnerd then I invite you to relax and pull up a chair but if Disney is not your thing…how on Earth did you end up here??

There are multiple reasons this park stands out among the others but the main draw for me is the castle– it’s heart-eyes to the max– so I’m dedicating a whole post to it!

Sleeping Beauty’s Castle in Paris is stunning, although often mistaken as Belle’s because of its french name- Le Château de la Belle au Bois Dormant, which simply translates the The Castle of The Sleeping Beauty. The design of this castle has to be my favorite with its whimsical hillside and waterfall, as well as square foliage that just may have been derived from the Sleeping Beauty film in 1959, but what’s inside makes it even better!

Per usual there is a story walk-through of the princess film that is paired with the castle. Paris features stained glass and tapestries that display scenes from the film and ends with a walk across a balcony that overlooks Fantasyland that sits in its backyard.

Imagineering in the work, there are suits of armor flanking the tapestry that shows the fairies putting the kingdom to sleep, and not only are they snoring, but one is tinted pink while the other reflects the color blue, just like a certain pair of fairies fought over the color Briar Rose’s birthday dress!

Sneaky Imagineers strike again, they enhanced this castle’s French qualities by adding snails that are climbing up two of the gold spires, something I did not notice on my first visit! Escargot, anyone? 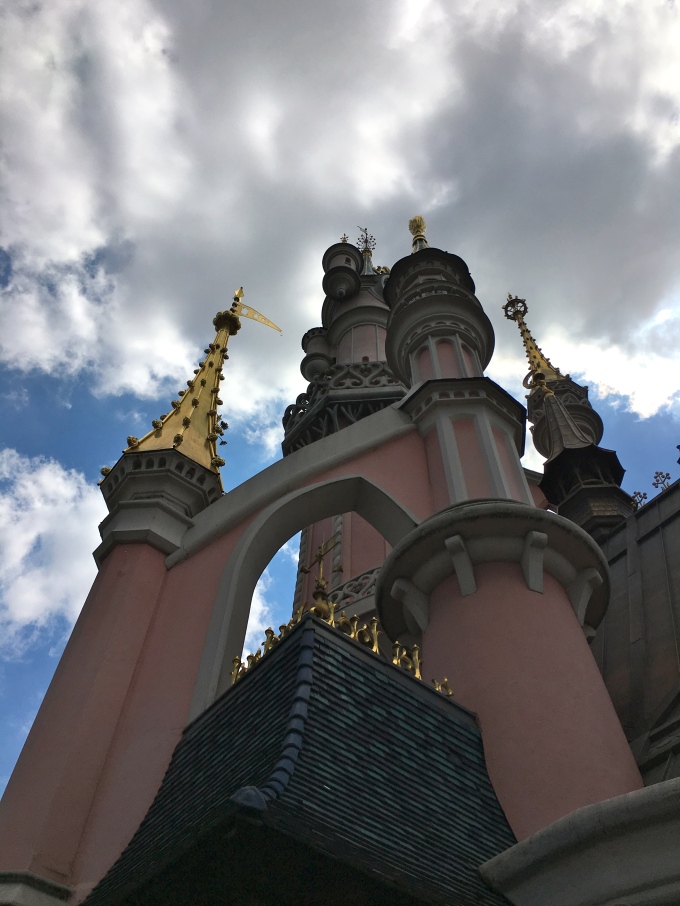 But what has to be the coolest and most unique part of the Parisian castle is the dragon underneath it! That’s right, tucked away in a cool chamber that serves as its lair is a slumbering dragon who puffs smoke when awoken by trespassers. Although believed to be Maleficent, this creature is a friend of Merlin the Wizard, who seems to share the castle with Aurora? Either way, this calm but intimidating creature really tops off the fairytale vibe Disney loves to emit.

I don’t know about you but I’ve got my bags packed and am ready to move into this castle and claim the crown! Who wants to be my roommate?