And no, I did not accidentally leave out an “l” in my greeting, that’s “hello” in Welsh! “Why did she write it in Welsh?” you may be asking yourself, well it’s because I spent yesterday in Wales, the land of sheep and unreadable words!

Linda and I headed out fairly early in the morning for a three hour drive to Aberystwyth, Wales, a town along the coast of the Atlantic Ocean. Yes folks, the Atlantic, not like the Pacific I’m used to seeing at home!

On our trek to the coast, we stopped at Devil’s Bridge, which is actually three bridges, rebuilt on top of each other over time. The name comes from the legend which starts off with “Once upon a time…around the 11th Century, the Devil visited Wales as he had never been there before and he had heard that the scenery was breathtaking.”, best start to a child’s story if I ever heard one! The gist of the story is that the Devil tries to make a deal with an old lady to get her cow back that had wandered across the river. In exchange for him building her a bridge, he will get to keep the first living thing to cross the bridge. Turns out the old lady is pretty tricky when she throws a loaf of bread over the bridge the next day, causing a dog to chase it and be the first to cross it. The Devil ended up getting a dog (which he turned away) instead of the cow he so desired…silly Devil! Legend says he was so embarrassed, that to this day he has never been seen in Wales again.

The three bridges- the bottom one was built by the Devil, as legend has it 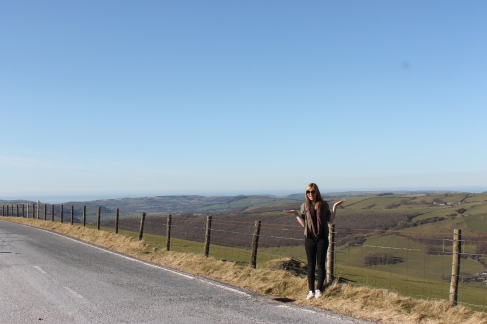 On the road between Devil’s Bridge and Aberystwyth, overlooking Wales on a surprisingly warm day

And we finally arrived in Aberystwyth, greeted by the chilly Atlantic!

I had originally planned on standing in the ocean so I could say I’ve stood in both the Pacific and Atlantic Ocean, but the water was a bit too icy cold for that. Now before you call me a chicken, let me tell you how a family I saw went about splashing in the ocean today; the child was dressing in a snow suit and they were all sporting Wellies (rain boots) as they charged into the water and jumped over oncoming waves. Is my excuse valid now? 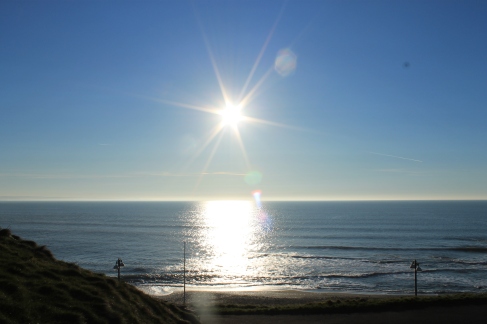 And yet, it is still so gorgeous.

Between sounds, smells, and the people around me (despite they language they spoke) the atmosphere reminded me of a mixture of Santa Cruz, San Francisco, and, yes mom, Smith River. I loved the college town, right down to it’s castle ruins. Yep, that’s right. Another castle! Although this one is so fallen apart it’s more of a play ground or study location overlooking the ocean, but no matter, I still love it and wish we had castles at home. 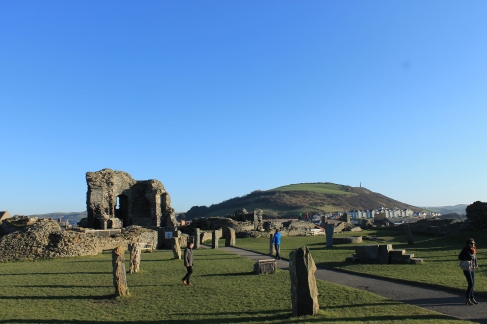 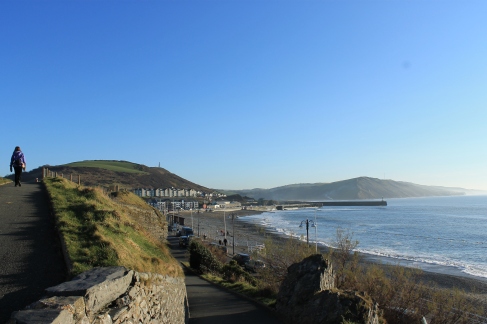 Castle ruins and the view from them

See that castle looking building on the left of this picture? Yeah, those are dorms at the Uni in Aberystwyth. Although it is required you are able to speak Welsh in order to live there, it’s still pretty cool. Step it up, America! 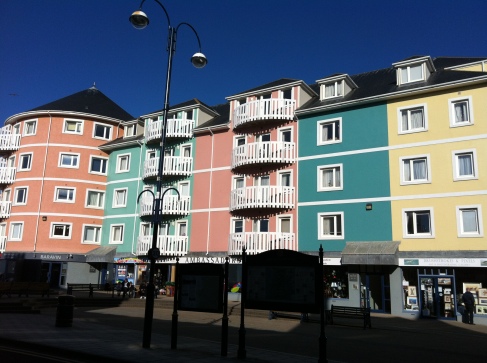 Brightly painted buildings, a common thing in the coastal town

So that concludes my time in Wales, country number two on my list of locations to visit over these four months. On a side note, the Brit Awards are on tonight and I am thrilled that I’m in the same country as them and can watch them live, rather then watching youtube clips the next day.

Michelle (if you didn’t comprehend that, it means I’m sick)