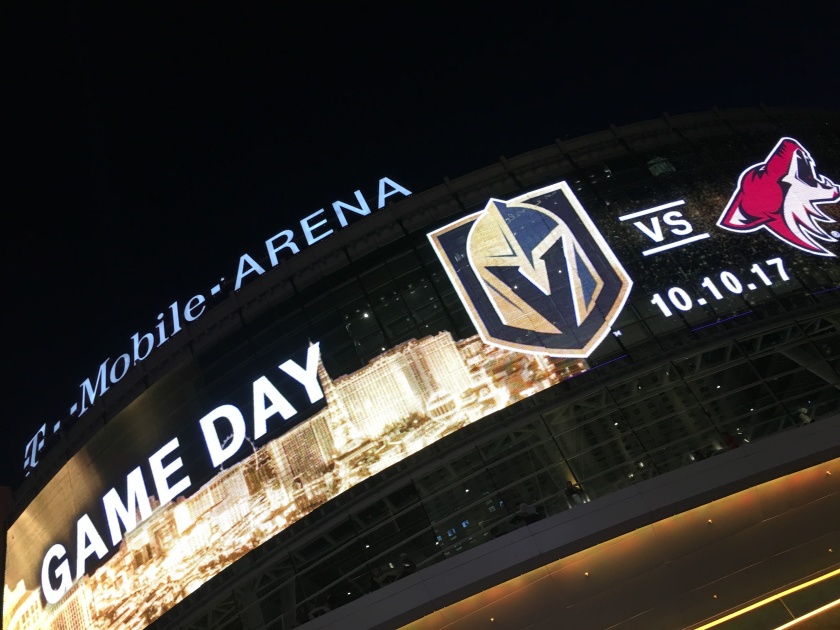 By some freak chance that only the Hockey Gods could throw together, I happened to be in Las Vegas at the same time as their brand new, NHL expansion team’s inaugural home opening game, and you can bet all your gambling money that I was there! 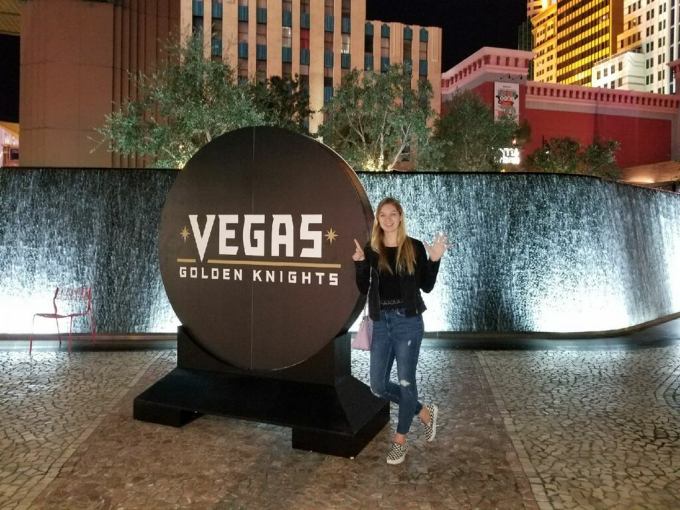 I should preface this post by saying this was not just any hockey game, or even an ordinary inaugural game, but it was a last minute tribute to the masses who were affected by the Route 91 Harvest Festival shooting just nine days prior. In such wretched times I witnessed the most powerful rallying of a community, nation and sports league. The spirit Las Vegas has to help their city heal is incomparable.

If you haven’t had the opportunity to watch the videos of the opening ceremony, I highly encourage you do, but be equipped with tissues (scroll through the videos at the bottom of the link to see more from the game!). 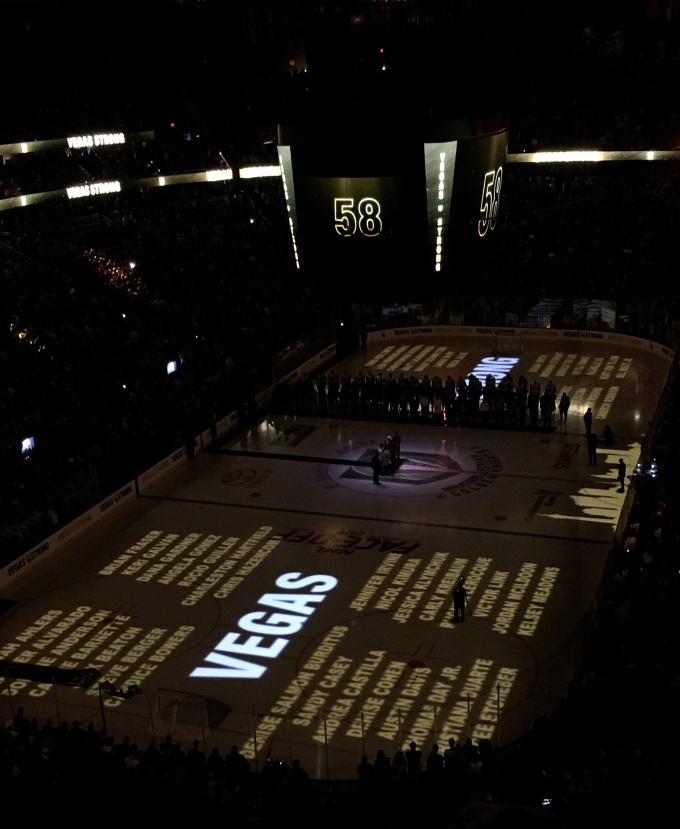 The Golden Knights and NHL did a phenomenal job of honoring the victims and first responders. The start of the game was pushed back by a half an hour so each Knight could present and escort a first responder onto the ice, where their opponents, the Arizona Coyotes, followed and stood behind the team, rather than opposing them. The inaugural puck was dropped by a group of child survivors, followed by an agonizing  58 seconds of silence, to honor the 58 people who lost their lives.

Though many were holding back tears, the crowd around me belted out a heartfelt rendition of the National Anthem along with the Route 91 festival team to close out a truly moving tribute. 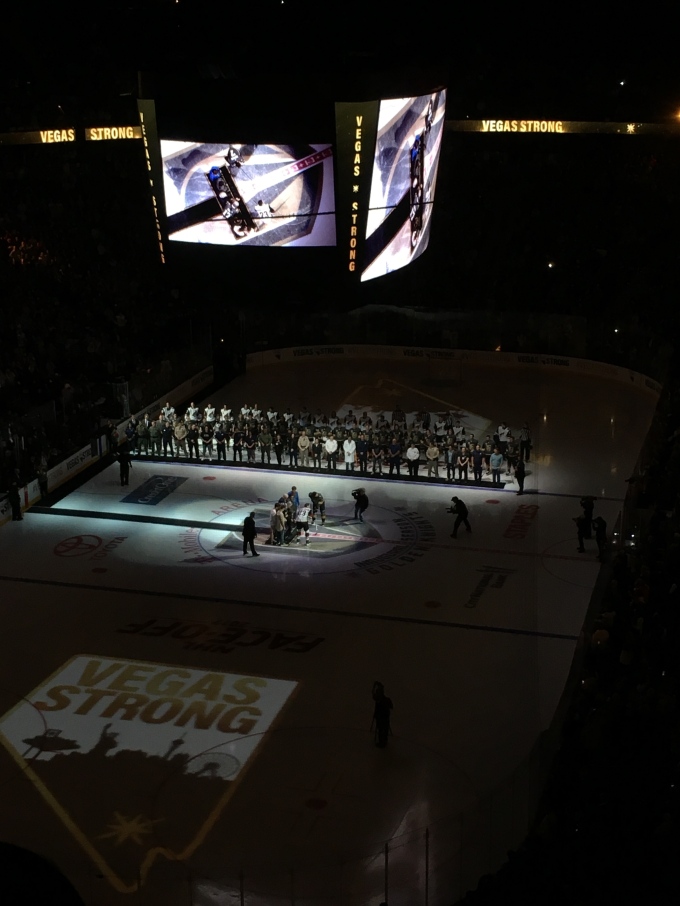 Apart from ceremony, the Golden Knights had an all-star start to the game with three goals in the first ten minutes! They beat the Arizona Coyotes 5-2, making them the first NHL expansion team to will their first three games. Look’s like Las Vegas’ Lady Luck is back!

In classic Las Vegas character, the first intermission break was accompanied by a performance from Cirque du Soleil, followed by the zambonis that have jousting lances tacked onto the side– tacky or genius?! You tell me, I can’t decide, but it definitely gets bonus points for character! And in the spirit of winning big, the goal horns are replaced by the sound of money cashing out at a casino. 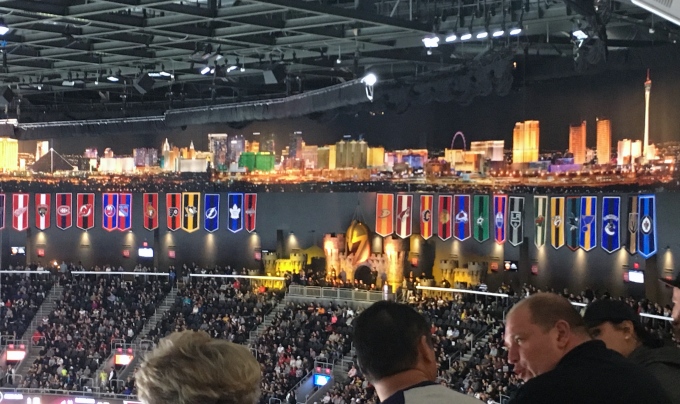 I’ll admit that when Las Vegas won the NHL expansion bid in 2016 I was extremely apprehensive. Hockey in a desert city? I know it’s been done before, but Las Vegas appears to be such a tourist, transient city that I didn’t think they would develop a strong following. Oh boy, was I wrong. This city is so excited to have an NHL team (and soon my local Oakland Raiders), and I saw Golden Knights apparel throughout my stay in Vegas, worn by all sorts of people.

It will be interesting to see how their first season progresses and how the city continues to embrace them and make it their own. Every team has their special thing, saying or action (San Jose’s Shark Tank and shark chomp on the power play) I’m waiting for them to take over the random castle that sits above the home team’s net, embellished with drummers and dancers, and make it a crazy bar or something. 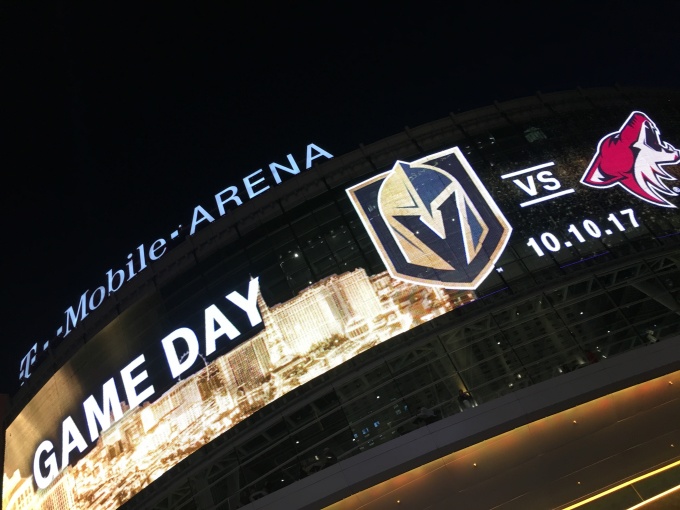 My game number six was by far the most memorable and historic, it’ll be tough but we’ll see if any of the 25 remaining stadiums can compare!